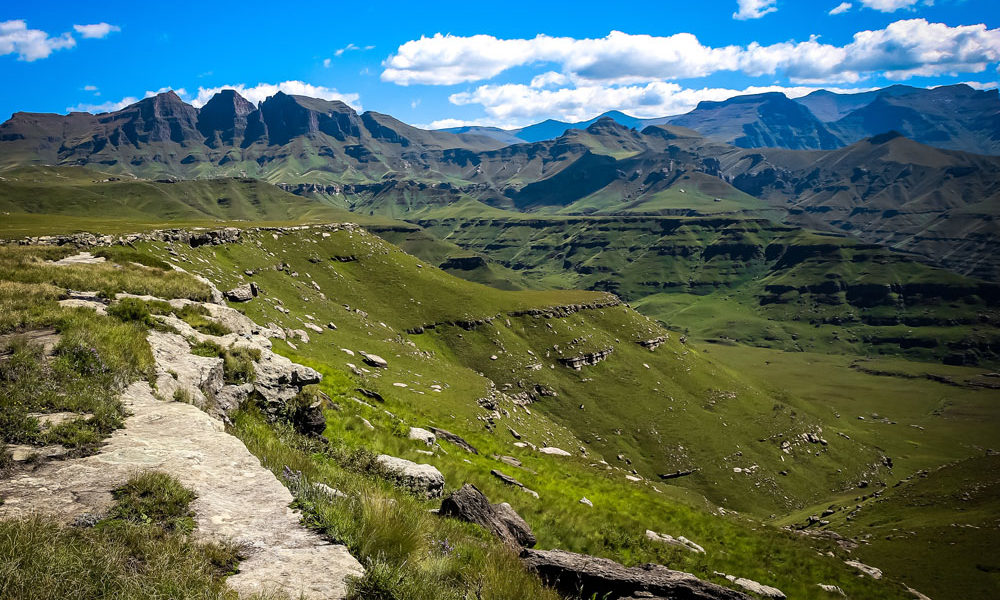 The ancient Zulus called the Drakensberg uKhahlamba – meaning barrier of spears because of its jagged peaks. An apocryphal tale about how its Afrikaans name, Drakensberg (Dragon’s Mountain) came about, describes how a Boer father and son reported seeing a giant lizard-like creature with wings and a tail flying above the cloud covered peaks.

Geologically the Drakensberg is a remnant of the original African plateau that existed 200 million years ago. Towards the end of this period, a cataclysmic geological event occurred that pushed the molten magma up through the earth to form basaltic lava. As the process of erosion and degradation of the land progressed, various uplifts occurred, which resulted in raising the summit of the Drakensberg to around 3000 meters.

As a consequence of the volcanic action, the soil in the foothills and valleys of the Northern Drakensberg was rich and fertile, and provided an ideal habitat for lush green forests, which were filled with the sound of cascading waterfalls. Animal and bird life was abundant and the San, who made their homes in the sandstone caves of this landscape, lived their hunter-gatherer lifestyles with great ease. This blissful era ended with the arrival of the pastoral Nguni who were who were followed by the white settlers who came with their cattle and firearms.

The English settlers moved into the area in the late 1850’s. David Gray was one of the first to lay claim on the land, which he transformed into a farm that he named Cathkin after the Cathkin Braes in his native Scotland. The farmers were followed by the woodcutters whose sawpits still remain in the Cathkin Valley.

From the 1920’s, the Drakensberg became a popular destination amongst adventurous holiday makers and mountaineers. In those days, it was a major expedition just to reach the foothills. Today the Northern Drakensberg is easily accessible and offers a wide array of activities and leisure options to suit the tastes of the vast number of people who visit the Berg each year.